How could a buildings decarbonisation strategy be linked to future developments of the UK ETS?

Buildings are going to be the toughest nut to crack on our journey to Net Zero. Some 23 million homes rely on natural gas for heating, with the majority of the remaining 4 million, off-grid buildings using either oil or LPG. In the next two decades, this will need to shift to a mix of electrified heating technologies (probably with heavy reliance on heat pumps), low carbon heat networks, and possibly hydrogen boilers.

Much of the technology already exists – heat pumps have been used for years around the world – but we lack the necessary supply chains and skills to improve the existing housing stock at scale. This is not surprising given that our current policy framework tilts heavily in favour of the high carbon option (gas heating) – with electricity prices that are significantly higher than its fossil fuel counterpart.

To change this and start making significant dents in buildings emissions we will need to make attractive low carbon heating options widely available. This will require urgency from Government to create an enduring policy framework for buildings decarbonisation, as well as buy-in from local authorities, communities, and citizens.

There certainly isn’t a silver bullet for buildings decarbonisation. That’s why our work has proposed a package of policy measures, including:

We set this out last year in Six Steps to Zero Carbon Buildings – but how could this link to the UK ETS?

What is the UK ETS?

The UK Emissions Trading System (UK ETS) came into operation on 1 January 2021 following the UK’s departure from the European Union’s ETS – covering electricity generation, heavy industry, and domestic flights. Under the ‘cap and trade’ principle, an upper limit of emissions is set – the cap – for all participating installations. Allowances for emissions within the system are auctioned off or allocated for free. Trading of allowances between installations can occur if an installation exceeds or outperforms its limit. In this way, installations are able to achieve emissions reduction in the most cost-effective way that meets their business needs. Government have said the emissions cap will soon be aligned with the UK’s 2050 Net Zero commitment.

The UK ETS currently encompasses electricity generation but omits natural gas (and other fuels used for heating). If the scope of the UK ETS were expanded to cover buildings, specifically heating, we potentially introduce 27 million – mostly unwilling and uninterested – participants.

One option would be for Government to expand UK ETS scope to include upstream fossil fuel suppliers (ensuring it exempts natural gas used in power generation as to avoid double pricing). This would indeed put a price on fossil-fuelled heating, but as said above, there isn’t a silver bullet. Such an approach would still have to sit within a package of policies, and may also involve a messy interface with tax and regulation of other liquid fuels. It might also need to sit alongside the proposed Green Gas Levy, and potentially future support mechanisms for hydrogen, resulting in a complex technology-specific policy mix (arguably similar to that we currently have in electricity).

We can also point to Germany, who have set up a new ETS to cover fuel supply not covered by the EU ETS (i.e. for heating and road transport). A major concern was the distributional impacts that might arise at current prices, which constrains potential linkages to the EU ETS in the near term.

Much of our work points to the potential for well-designed outcome-based policy mandates to drive decarbonisation. These can also be combined with tradeable carbon credits. We believe that a combination of carbon performance requirements for all buildings and rewards for low carbon choices through energy bills could provide the beginnings of a carbon market in the buildings sector, which over time becomes linked and integrated with the UK ETS. We have sketched out a potential building carbon credit mechanism in the slide deck that accompanies our Six Steps to Zero Carbon Buildings work (see figure below). 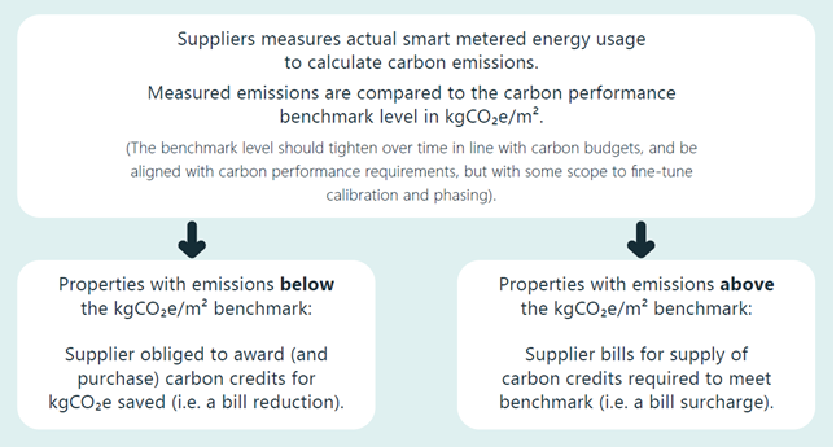 While the UK ETS could eventually have a role in the decarbonisation of buildings – aside from helping enable zero carbon power, as discussed in last week’s blog – the UK needs to introduce a policy framework that makes linkages between sectors a viable option. We believe that a sector-led approach can be used to support this. As with our Six Steps, sectoral policy instruments that are designed to integrate over time with the development and eventual expansion of the UK ETS should be the way forward. In this way, the UK can create an ETS that is truly world-leading.

How the UK ETS could work for industry and help UK competitiveness.